The Chicago Bulls are 27-14 at the halfway mark of the season, on pace for 54 victories.

It’s been a first half filled with excitement, heightening expectations for what’s next. Particularly since the Bulls have so rarely been whole. 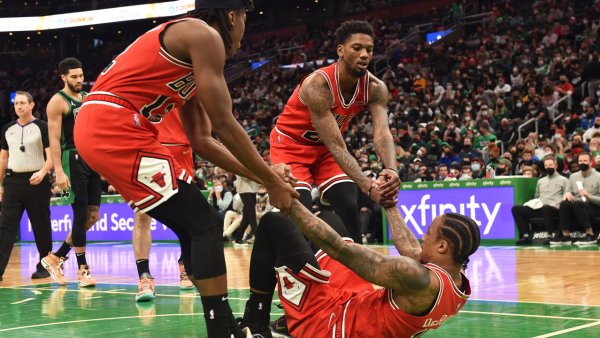 The second half begins Monday in Memphis. Here’s a look back at some highlights.

DeMar DeRozan and Zach LaVine offered plenty from which to choose. But DeRozan’s 38-point masterpiece in the 115-110 victory over the Los Angeles Lakers on Dec. 19 stands out for multiple reasons.

It marked DeRozan’s first action in two weeks following a stay in the league’s health and safety protocols. The Bulls played without LaVine, who landed in the same protocols days prior. And it featured plenty of the signature elements that has defined DeRozan’s sublime season.

DeRozan sank 16 of 17 free throws, repeatedly pump-faking the Lakers into defensive mistakes. Most crucially, he scored 19 fourth-quarter points, including a 20-foot jumper over LeBron James that nudged the Bulls ahead for good with 52.6 seconds left.

Again, there are plenty to choose from, and perhaps the Bulls have played better than in their 121-103 dismantling of the Lakers in Los Angeles on Nov. 15.

But for sheer significance, this one stands out.

It capped a take-notice sweep of the Los Angeles teams on back-to-back nights, pushing the Bulls to 10-4 at a time many questioned whether their fast start had staying power. It featured DeRozan scoring 38 points on an uber-efficient 15-for-23 shooting that has defined much of his first half.

Lonzo Ball sank seven 3-pointers in his return home and flirted with a triple-double with eight assists and seven rebounds. Alex Caruso submitted his typical, all-encompassing defensive impact despite going scoreless. LaVine sank six 3-pointers en route to his 26 points with five assists as the Bulls shot 55.1 percent with 31 assists.

No wonder Anthony Davis didn’t want to stick around, getting ejected out of frustration from the Bulls’ swarming defense after drawing two technical fouls.

The fact this category has choices is impressive.

Even more impressive is the fact that DeRozan became the first player in NBA history to make buzzer-beating game-winners on consecutive nights. They came in different years, though, sinking the Pacers on New Year’s Eve and the Wizards on New Year’s Day.

Both were on the road. Both were difficult shots.

So which is the best? There’s no wrong answer.

But from this vantage point, as difficult as the one-legged heave from up top was to sink the Pacers, the shot to beat the Wizards was more difficult. DeRozan had such little space to operate in the corner directly in front of the Bulls’ bench. He also had two defenders on him, one of whom he cleared with — you guessed it — a pump fake.

Those were coach Billy Donovan’s words from Dec. 11 and there’s no better way to summarize the surreal situation that enveloped the Bulls throughout the month.

Coby White entered the league’s health and safety protocols on Dec. 1, followed by Javonte Green on Dec. 3 and then followed by, well, pretty much everyone.

That included Stanley Johnson, who was signed to a 10-day contract via a hardship exception and promptly landed in the protocols, leading to Donovan’s quote.

The NBA did step in to throw the Bulls the only lifeline given to a team this season, postponing two games even though the Bulls would have had the minimum eight bodies needed. That the Bulls navigated the difficult month with a 9-2 mark was impressive.

A conventional line of thinking during training camp was that second-round pick Ayo Dosunmu would be spending some of his time playing in the G League for the Windy City Bulls.

But Dosunmu stood out early with his poise and his physical presence. Undaunted by pretty much anything thrown his way, Dosunmu immediately earned Donovan’s trust — and a spot in the rotation.

That he capped the first half with his first career double-double in just his third NBA start speaks volumes about his preparedness.

Another conventional line of thinking was that LaVine wouldn’t be able to match last season’s near-record shooting and scoring efficiency. That with the arrival of DeRozan, his numbers would go down.

But while DeRozan has rightfully placed himself in the conversation for league MVP, LaVIne isn’t far behind. And his shooting splits are still red-hot.

LaVine’s welcoming and acceptance of DeRozan has finally put to bed the tired label that he’s an empty calories scorer only focused on individual statistics. He wants to win.

When Donovan landed in the league’s health and safety protocols, assistant coach Chris Fleming became the face of the franchise for five games. And while Donovan stayed engaged in coaches meetings via Zoom and Fleming made sure to spread credit around to the staff — with everyone’s role increasing — he was still the one making the in-game decisions, meeting the media, handling the pressure.

The Bulls went 5-0. All the victories go on Donovan’s career record.

“To be honest, I’m quite relieved I can give this back to Coach,” Fleming exhaled after the New Year’s Day victory over the Wizards that featured DeRozan’s second buzzer beater.

Players greeted Fleming with a celebratory water bottle shower in the postgame locker room. That seemed fitting for a team that doused all preseason questions about chemistry.

The Bulls’ first half was soaked with success. Now the march to the finish line begins.